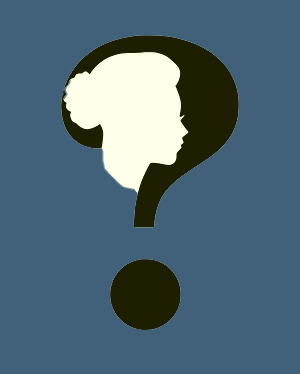 I have been researching and writing The Wisdom of the Flock for many years now.

Along the way, I have been searching for an image of Marianne Davies regularly – and in vain.

Some characters portrayed in the book are easily recognizable today as they were in their own time. Such famous personages include Ben Franklin, Marie Antoinette, Casanova, and John Paul Jones, to name a few. For these characters it is easy to find images of what they looked like in real life done by contemporary artists of the day.

Not so for Marianne Davies. Why is that?

In the 1700’s, it cost a lot to have your portrait done. A receipt from 1712 in England showed that it cost 20 guineas (21 pounds sterling) artist fee alone for an oil painting portrait of a Viscount. That would be $2682 in 2019 US Dollars, according to the measuringworth.com calculator linked below. And that cost would not include expenses such as framing, shipping, etc.

The Davies sisters and their mother were never rich, and often barely scraped by financially. So it seems unlikely that they would have splurged on lavish oil portraits. Also, they moved around a lot. They traveled the European continent in order to make a living playing their music, and probably stayed in some fairly transient accommodations. It doesn’t seem likely that they would lug around an oil painting with them.

But what about other images? As I noted in my blog post on Ben Franklin in Portraiture, there were lots of options (big and small) in the late 1700’s for portrait images. Miniature portraits, medallions, etchings, and drawings were all available at the time. And musicians (such as Cecelia and Marianne Davies) would occasionally have such portraits made. Perhaps their mother forbade it? She was notoriously frugal.

Another possible reason is that there were portraits, but they are not identified. Many miniature portraits painted in the 1700’s failed to identify the subject. They were meant as keepsakes for a family member or lover and as such the owner would know the subject intimately. There was no need to put their name on them. One can find hundreds of 18th century miniature portrait images on the internet – but many are of “unknown subject”. One of these might be a portrait of Marianne Davies and we would never know.

Also, these images might have simply been lost, tossed out, or never digitized – as the sisters were not especially famous.

There are several known images of women playing the glass armonica from the late 1700’s, however.

The following example, a drawing of Angelica Kaufmann playing the glass armonica, would probably be around the same era in which Marianne Davies played. 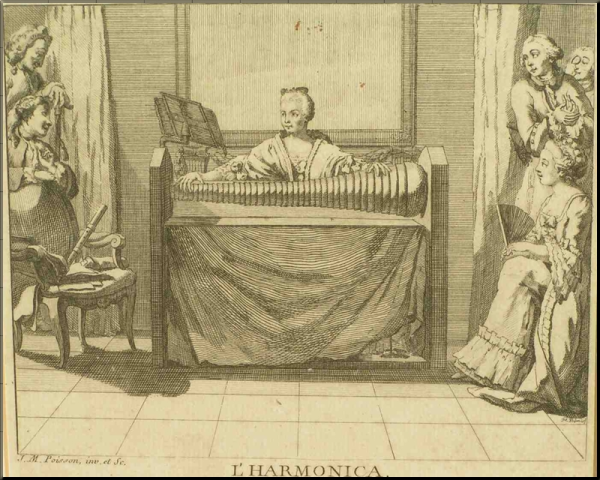 Also, Marianne Kirchgessner played the glass armonica around Europe from the mid 1790’s until her untimely death in 1808 (from a fever at the age of 39). This image is easy to identify because the artist illustrated her name underneath her silhouette. 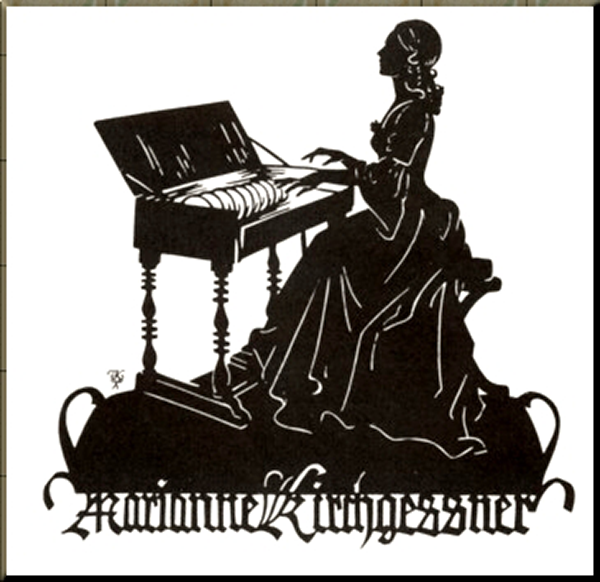 And yet, there are no confirmed pictures of Marianne Davies, not even any showing her playing the famous musical instrument that Ben Franklin invented for her. 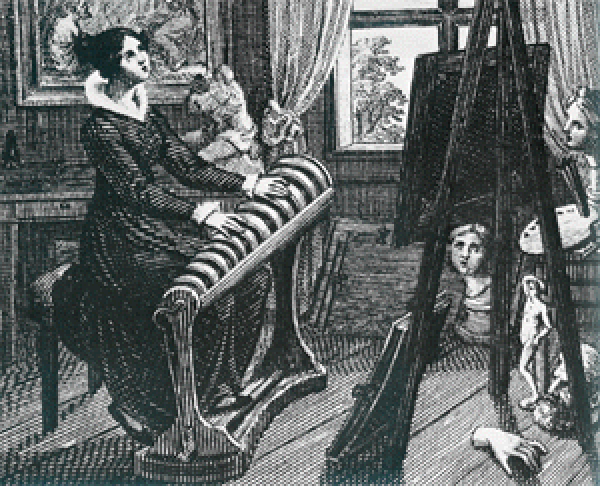 That is Angelica Kauffman again, from an 1819 copperplate by Karl Rahl. She was also a painter, and her easel is shown with various artist paraphernalia.

The painting for the cover of this CD of glass armonica music is entitled: The Sanders Sisters playing the Musical Glasses. The original is an oil painting by J.F.A Tischbein, circa 1790, and now resides at the Kunstmuseum Den Haag, Netherlands.

However, one strong possibility for an image of Marianne Davies is the following: 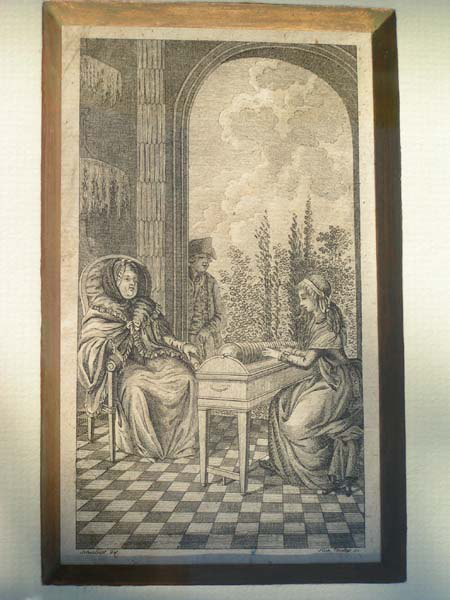 This undoubtedly lovely, but unfortunately low resolution, photo of a drawing or etching comes from the website of modern-day glass armonica player Thomas Bloch. www.thomasbloch.com

The caption given on the website is:  Marianne Davies playing for Comtesse de Brionne (Thomas Bloch’s collection). Most likely the aristocratic lady listening would have been Louise Julie Constance de Rohan (1734-1815) – the wife of the Count of Brionne. However, she would only have been about 10 years older than Marianne in real life, so the artist may have taken some liberties with the ages of the subjects. Nonetheless, this would place the site of the scene in France, at least. It is not clear who the lurking young man might be. It is definitely not Franklin – or Mesmer. Perhaps Marko? But he is fictional – so it’s highly unlikely! A young man peeking into the scene was a popular visual prop used by artists of the day simply meant to show that her music was enjoyable and drew attention.

Still, the image fits well with how I believe Marianne would have looked in the late 1770’s. She is portrayed as youthful, talented, fit, and calmly confident.

Unfortunately, the artist signature cannot be deciphered, and I have had no luck contacting Mr. Bloch to get a better image or clarification of its provenance.

Update December 2020: Thomas Bloch was kind enough to answer my request for a higher resolution image and sent the following – 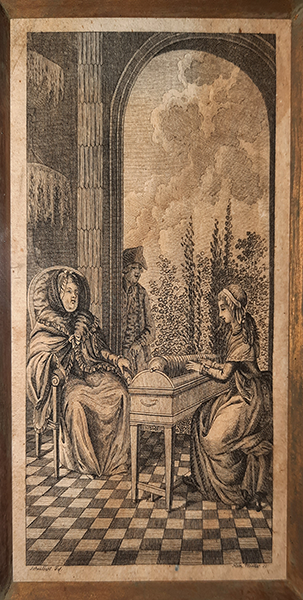 I had to “deskew” it, which distorted the image a bit, but it is higher resolution. Also, I could now decipher the artist(s) signature. On the left it says Schubert del (which stands for Johann David Schubert) who was the draftsman, and on the right it says Hein Muller (which stands for Johann Heinrich Muller – the engraver). While I still haven’t found the original source for this image, Mr. Bloch said that he bought it in a store in Boston many years ago. Many of these images were originally book illustrations. The combination of a Muller engraving after Schubert seemed to have been quite popular in the late 1700’s and early 1800’s. I will continue to search for the source – but getting closer!!

While definitely not Marianne Davies, this next portrait is one of my favorites from the era – as an example of how she might have looked: 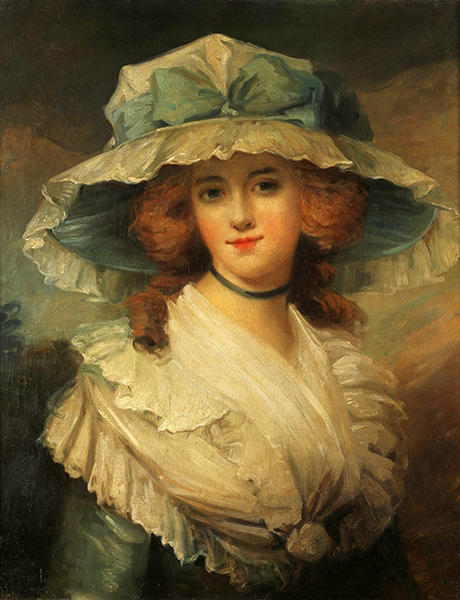 This portrait is of an unknown subject, possibly Emma Hart, an English actress and the future lady Hamilton, was painted by George Romney in the last quarter of the 18th century. The subject is not wearing a peach colored dress of course, but her curly red hair and piercing expression remind me of how I tried to portray Marianne Davies in the book.

All of this background is leading up to a challenge and a contest, my dear readers!

Anyone who can find a verifiable image of Marianne Davies and deliver it to me in any format (print, digital, etc.) will get a free autographed hardcover copy of The Wisdom of the Flock (when it is published in early 2021).

The image does not necessarily have to show Marianne playing the glass armonica, but that would be welcome. It should have enough background information to confirm that it is an image of her.

Also, I would love to find an image of the Davies sisters (Marianne and Cecelia) together – and if you can produce both – especially playing music, I will come up with a suitable grand prize!

Most (if not all) images from this era reside in the public domain based on their age alone – but in some countries, images captured from artwork belonging to a museum or private collection may be covered by copyright laws. Please make sure that it is legal to distribute any image you find.

So please, scour the internet and other sources for possible images of Marianne Davies and/or the Davies sisters, and contact me (steve@stevegnatz.com) if you believe that you have found one.