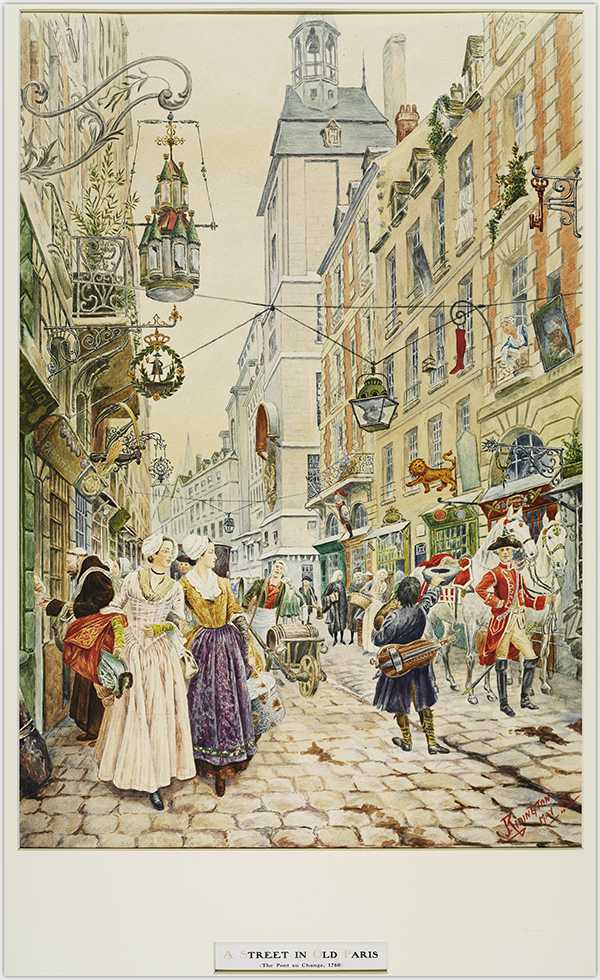 What was Paris like in the late 1700’s when Ben lived there?

Paris was the 2nd largest city in Europe (after London) at that time – with a population of about 600,000 people toward the end of the 18th century. The city was then, as it is now, centered around the Île de la Cité, an island in the Seine river where the Notre Dame cathedral sits. 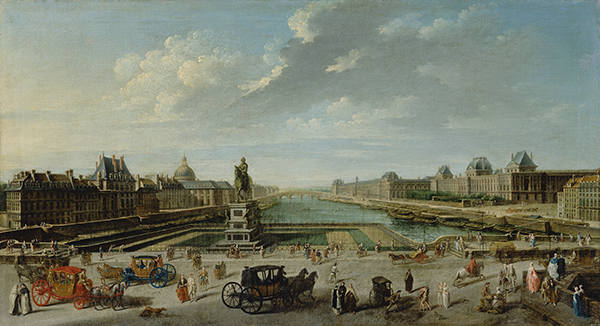 Above is a view of the Pont Neuf (new bridge) – painted in 1763 by Nicolas-Jean-Baptiste Raguenet – looking downriver from the Île de la Cité. The Pont Neuf was completed in 1607, making it the oldest standing bridge in Paris today. Not too shabby for the “new bridge”. On the right bank of the river is pictured the Louvre, which housed governmental offices at the time. The statue in the middle of the bridge is of King Henry IV on his horse. It was destroyed during the French revolution but subsequently rebuilt. 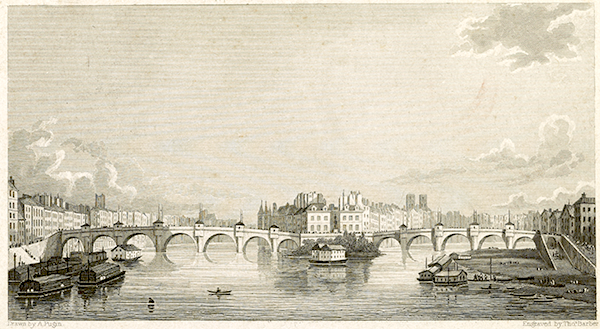 The engraving above shows us a view up the river from around the same time, looking back toward the Île de la Cité in the middle.

In both these views, you can see the steps and walkways down to the river with barges moored similar to the one portrayed in The Wisdom of the Flock.

But here is an even more dramatic painting of the river Seine: 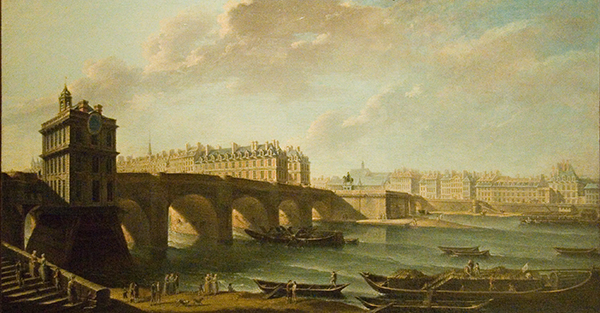 In the Raguenet painting of the Pont Neuf above, the river bank is more clearly shown. However, it seems a bit exaggerated in breadth, at least from my recollection. Perhaps the Seine was more wild in the 1700’s. Still, I never recall seeing whitecaps on it. 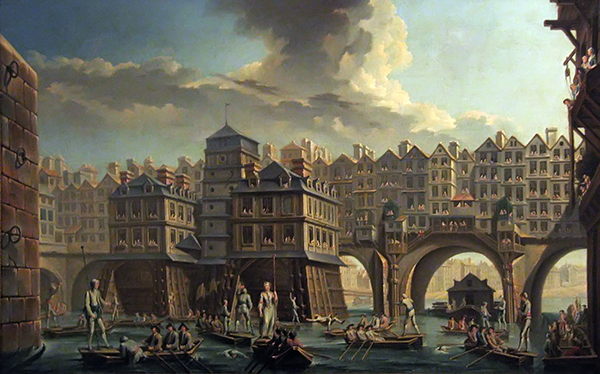 And just so you don’t think that the Pont Neuf was the only bridge in Paris ever painted, above is another Raguenet painting showing the Pont au Change with sailors getting ready to joust. It must have been a popular sport from the size of the crowd of onlookers. The featured image for this post is also of the Pont au Change (originally named for the money-changers that set up shop there) but from the street instead.

The city center was quite crowded, noisy, and smelly – as there were no sewers yet. People who could afford it tended to live further out. But not usually as far away as Passy or Auteuil – these were outside of Paris proper at the time. 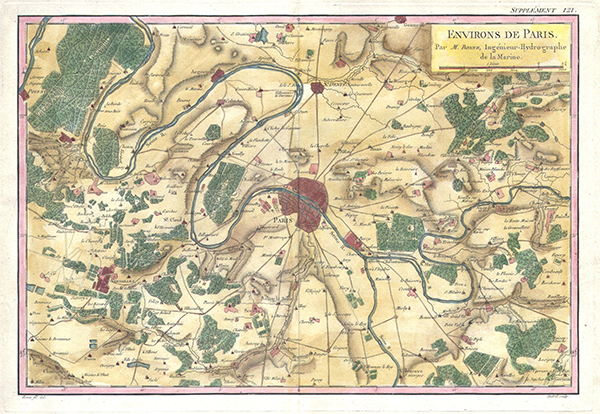 This map of Paris in 1780 and the surrounding “environs” – shows Passy and Auteuil – just to the west of the Seine along the eastern border of the King’s Wood or Bois de Boulogne. Today, these areas are in the 16th arrondissement, not too far from the Eiffel tower – well inside the city limits. Versailles can be seen to the south and west of Paris on this map as well. A detail from the same map showing the geographical relationship of Passy, Auteuil, and the Kingswood. Of note, the Pont Neuf can be seen just to the right of the crease (dark line) as it crosses over the Île de la Cité at its tip.

Still Paris was the hub of commerce, entertainment, and city government in 1776 when Franklin arrived. This was notwithstanding that the seat of the royal power was moved to Versailles in 1722. 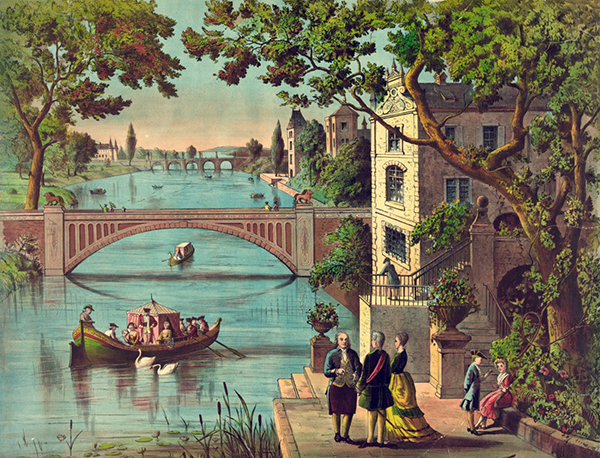 In the above (highly romanticized) image from 1882 by the Charles Brothers, Franklin is portrayed being received in France alongside a river. The location could not have been Passy, as there were no bridges across the river there in 1776. Also, the river looks much too small to be the Seine – but perhaps the artist intended the scene to be a tributary or canal within the city. Anyway, it gives us another look at what Paris may have looked like in Franklin’s time. 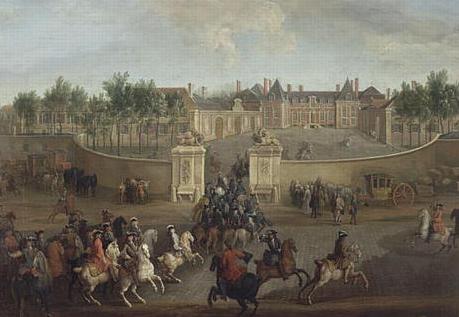 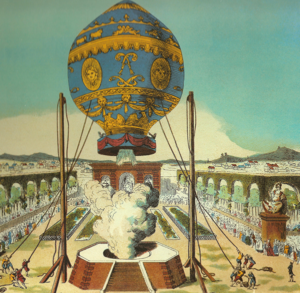 Another setting used in The Wisdom of the Flock is the Château de la Muette located in the Kings Wood (Bois de Boulogne) – the old royal hunting grounds, also outside the city gates of Paris at the time. It looks as though the horsemen pictured are amassing for a hunt. While the large stately château pictured above was once home to King Louis XVI and Marie Antoinette before they moved to Versailles, at the time period portrayed in The Wisdom of the Flock (1776-1785), only some of the out-buildings were used to house the Royal Scientific Laboratory. The Château de la Muette was also the site of the first manned free (non-tethered) balloon flight in history – witnessed by Ben Franklin in 1783 – and recounted in the book.

For a fascinating “virtual tour” of the sights and sounds of Paris in the 1700’s you can follow this link:

Animation presents the recreation of 18th century Paris, accompanied by the apt sights and sounds

Surely, Ben had a lot of interesting environs to explore during his time in France!